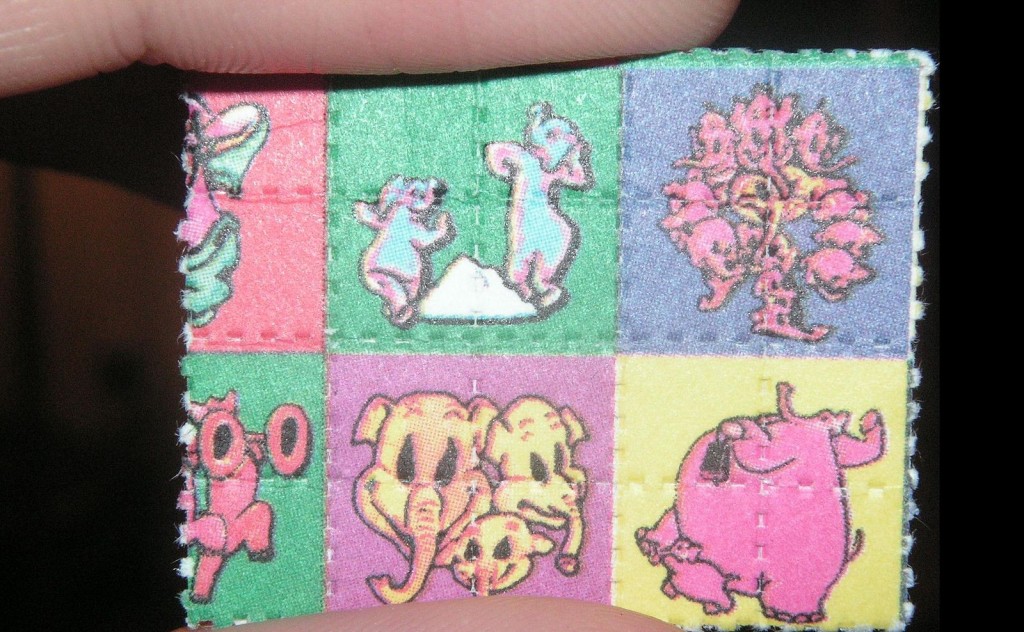 An LSD blotter like this one has been the most common way to take LSD in the past, but will we soon see it as a legal prescription drug? | Image Source: Public Domain via Wikimedia Commons

When people hear the word psychedelic, the first substance that often comes to mind is lysergic acid diethylamide (LSD), more commonly referred to as acid. This powerful psychedelic has been hailed by scientists and therapists as a breakthrough therapeutic tool, celebrated by countercultural figures as a way to disturb consensus reality, and maligned by the establishment as an instrument of revolution. In many ways, LSD is the quintessential psychedelic — a potent medicine that was caught up in decades of taboo and cultural drama that has often eclipsed the wealth of scientific study on its therapeutic benefits. But behind all that misinformation and stigma, what are the benefits of LSD, truly, and what do we know about its uses in a therapeutic context?

Birth of a New Therapeutic Medicine

What surprises many people to find out is that that after LSD was first discovered in the 1930s by Swiss scientist Albert Hoffman, its primary use was by psychologists as a therapeutic tool. LSD was produced commercially as a prescription drug in the 1940s. Many therapists found it to be an invaluable aid to help their patients have breakthroughs in their therapy sessions, allowing long-seated issues to finally dissolve in a wave of LSD-assisted revelation and insight. People who benefited from LSD therapy in the early days included such popular figures as Cary Grant and Aldous Huxley.

In the early days, LSD also showed a lot of promise in the realm of addiction treatment. A team of Norwegian scientists recently did a study of six different clinical trials from the mid-20th century when LSD treatment and research was fully legal. Their findings were that even a single dose of LSD had measurable benefits for people battling alcoholism. Even Bill Wilson, the founder of Alcoholics Anonymous, admitted that he had experimented with LSD and thought it was both safe and useful for spiritual growth by helping to dissolve the ego.

Opening the Gates to LSD Research Once Again

In 2014, the first clinical trial on the therapeutic benefits of LSD in over 40 years was conducted in Switzerland by psychiatrist Peter Gasser and published in the Journal of Nervous and Medical Disease. Gasser studied the effects of low and high doses of LSD in twelve patients who were terminally ill and dealing with intense depression and anxiety related to their prognosis. Although the sample size was small for this initial study, Gasser found emphatic proof that LSD is both safe when administered in the right conditions as well as highly effective at easing patients’ anxiety and depression. All twelve patients reported measurable benefits and said they would not only do it again themselves, they would recommend LSD treatment for others in the same situation. While the study was small, it’s highly significant for being the first study on the benefits of LSD in over four decades, especially because the results supported LSD’s safety and efficacy as a therapeutic medicine.

Another trend that has people taking LSD more seriously is the recent rise in popularity of microdosing, a practice where a small, subthreshold dose of a psychedelic substance is taken to stimulate creativity. People like Tim Ferriss and many other entrepreneurs have sung the praises of this practice, or simply practiced it on the down-low to help problem solve and navigate the dynamic modern entrepreneurial landscape where the right creative idea can translate to billions of dollars. There haven’t been many scientific studies on the efficacy of microdosing with LSD, but it’s a subject worth further investigation and clinical research.

With growing evidence and recognition of LSD’s therapeutic benefits, will it be a prescription drug once again in the not-too-distant future? With the political climate always shifting, it’s hard to say, but we can be certain that LSD simply cannot remain a Schedule I drug for much longer — there are simply too many scientifically-documented therapeutic benefits of LSD for it to be considered devoid of any medical use. With reliable and proven benefits in spiritual and personal growth, treating alcohol addiction, and easing end-of-life anxiety and depression, LSD should once again be taken seriously as the therapeutic medicine it’s shown itself to be.