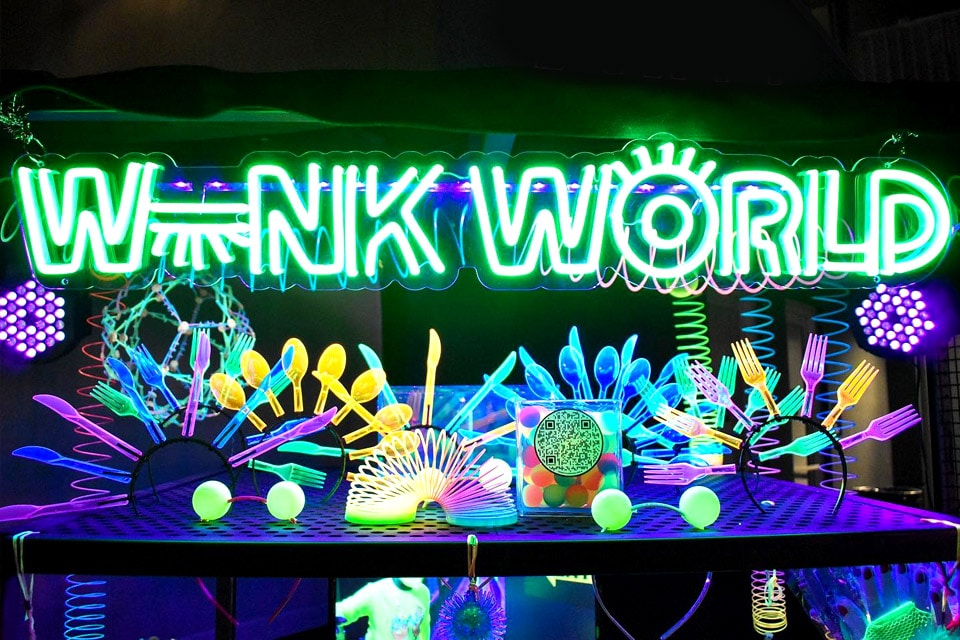 Chris Wink is the co-founder of the legendary Blue Man Group, and has recently opened an immersive psychedelic funhouse exhibit in Las Vegas called Wink World: Portals Into The Infinite. The exhibit is located at AREA15, which is also home to Meow Wolf’s second permanent installation Omega Mart, making the location a doubly awesome psychedelic art destination. We spoke with Chris recently about Blue Man Group, Wink World, psychedelics, and what might be brewing in the future.

Thanks so much for speaking with us Chris. There’s something lovely about how subversive and psychedelic Blue Man Group is. I’m reminded of DMT elves performing on stage with crazy lights, sounds and colors. And of course Wink World is more overtly psychedelic. What led you to exit Blue Man Group and start Wink World?

The irony of Blue Man Group for me was that it became a job. We wanted to keep it going so we kept working on it, but at a certain point I felt like I had to get out of there. I had to listen to the message of the work, which is don’t just get trapped in something. The real Blue Man thing for me to do was ultimately to walk away from it. And that’s when I started working on Wink World. But it wasn’t like, “Here’s my next project.” I literally just went into my bathroom and started playing with lights and mirrors, and had no idea where it would lead.

That’s something I’ve really learned from psychedelics, actually. I don’t think my best work has ever come from having a goal. It’s more from a place of surrender and play and not knowing where it’s going or having an outcome in mind. That’s where Blue Man came from—it was a labor of love that just evolved, and same thing with Wink World. I’m going to make sure I keep creating from that place.

You can very easily lose that sense of surrender, but I think that with this duality of the visionary and trickster between volition and surrender, every artist has to learn how to navigate back and forth. If you don’t find that surrender, then you miss all the gifts the universe has to give you—the happy accidents you didn’t plan—but you also need the hard work and the structure. The danger of the artist is that you become the God of the world you are creating, and the hubris is that you’re God, and you forget that you’re not. But you are! So toggling back and forth from being the God of your universe and a citizen of your universe, a subject, is the balance needed to create something really special.

It seems like you are a hyper-creative person and would be with or without psychedelics, but was there any particular visionary experience that contributed to your artistic drive or process?

When I was 14 I had a mystical experience without any substances. Later in my life, having experimented with psychedelics, I look back and wonder if I had some kind of natural DMT secretion or something. Do you know anything about that, if that is possible?

I have heard conjecture about that, like it could be produced by the pineal gland, but aside from that I’ve also experienced deeply transformational non-ordinary states of consciousness without the use of any drugs.

I’ll never know what the biology was, but when I was 14 I was with a group of friends up in the mountains of Utah, and I hiked up ahead of everyone else. It was beautiful out there. I wrote about it afterwards in a letter, and luckily my mom saved it, because essentially it was a poem about an acid trip. I felt completely at one with nature, I felt infinite, I felt connected to the sun, the universe. I felt like the flowers were looking out for me. I felt a kind of divine feminine presence all around me, and a sense of a journey without end. It was a really impactful moment in my life, but afterwards it was like, okay, back to my normal life now. I didn’t know what to do with it.

I feel like in some way that experience was always there haunting me, and when it came time to figure out what to do with my life as I got older, I just wasn’t happy with the choices in front of me. I think I was always trying to get back up to that mountain. Having had that experience, I knew it was possible. Since I didn’t have any advanced expertise in any one art form, I thought maybe I’d be a multimedia artist where I could combine my weird set of interests. I was into art and design and lighting and music and drumming and comedy and mask work, but there was no job for that.

I’ve also loved playing with technology, but always had this urge to drum by a campfire, you know? This weird primordial need to go forward into new creations, and go back to the cave. Modern primitive energy. Assertion of the body, assertion of the primal, the primordial, in the face of this new world we are in, with the internet and computers and everything. I just sort of honored both sides of that, instinctively.

It wasn’t until my mid 20’s that I had a psychedelic journey with mushrooms, but it wasn’t jarring, it was “Oh I’m home.” We didn’t do a lot of psychedelics in the process of creating Blue Man—it was our psychedelic. And it’s a similar feeling with Wink World. I’m hoping to offer a glimpse of a psychedelic experience, but without necessarily needing the actual medicine.

More recently in the last 5 years, I’ve grown interested in the psychedelic renaissance and supporting it. Upon experiencing DMT for the first time, I really thought, “Oh wow, there it is!” It felt like I’d been trying to tap into that all this time. It was familiar, not a new thing… it felt like my ancestral home or something. It’s definitely impacted Wink World more directly because some of the repeated pattern ideas in the infinity rooms and black light vibrance have been influenced by things I’ve seen in my own mind while on medicine. It’s definitely had an impact on that experience, and I’m happy to admit that. 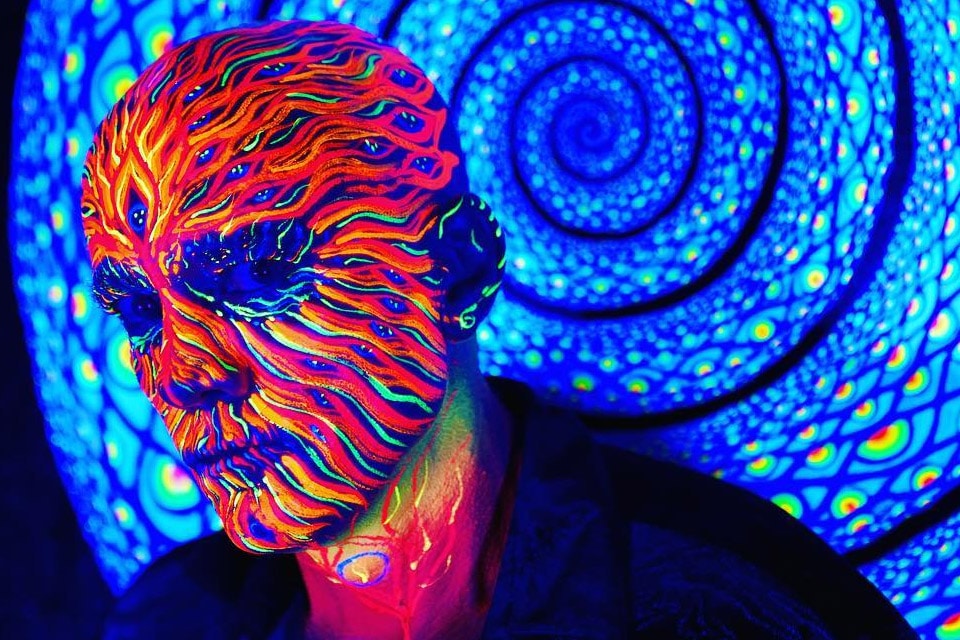 Wink World looks really incredible, and it’s so awesome to have overtly psychedelic exhibits open to the general public. When looking at what’s next for you, will Wink World expand, or do you have other projects in the works?

There’s a lot more to explore at Wink World, and I’m hoping to open another exhibit in New York or somewhere else. I want to explore the idea of the psychedelic funhouse more. What could “psychedelic” mean for immersive experiences, beyond just the aesthetic? I don’t think it’s particularly valuable to have “psychedelic” only mean a certain type of aesthetic or color palette, like Yellow Submarine or Psytrance video visualizations. I’m curious about the ideas behind psychedelics, rather than just the packaging.

If some of the ideas are ego dissolution, connectivity, love, connection to nature, there’s more here than meets the eye, things like that… those ideas could be explored in more than this one aesthetic style. So I’m curious to see if we could come up with another exhibit that wouldn’t resemble the first exhibit at all on a visual surface level, but would still play with those ideas in an entertaining way.

The other thing I look at is that maybe what I’m here to do, in part, is to bring some of this stuff from the underground to the mainstream. That’s sort of what we did with Blue Man Group and I was proud of that. We brought that stuff from the East Village to Vegas, and people who go to the rodeo went and saw it. I like the idea of bringing underground things to wider audiences. I’d like to help destigmatize psychedelics in more than one way, beyond the medical headlines, and come at it from a different side. Maybe we can do more in terms of having ways for people to access the ideas behind psychedelics.

I have lots of fun playtime ahead of me in the Wink World playground. It’s such a pleasure working on this because it’s really what I’m here to do. I’m not the best at any one of these mediums, but I’ve learned a lot about how to mix together light, sound and motion to create a theatrical experience in a context that blurs the line between carnival and art gallery… the mixing of high and low culture. We never saw Blue Man as performance art; we saw it as vaudeville and had that more populist aspiration rather than elitist. That’s on my horizon—exploring Wink World and Portals Into The Infinite and a new exhibit where we can explore what “psychedelic fun” can mean in different ways.

We are very grateful to Chris for taking the time to speak with us. Learn more about Wink World and get tickets here.