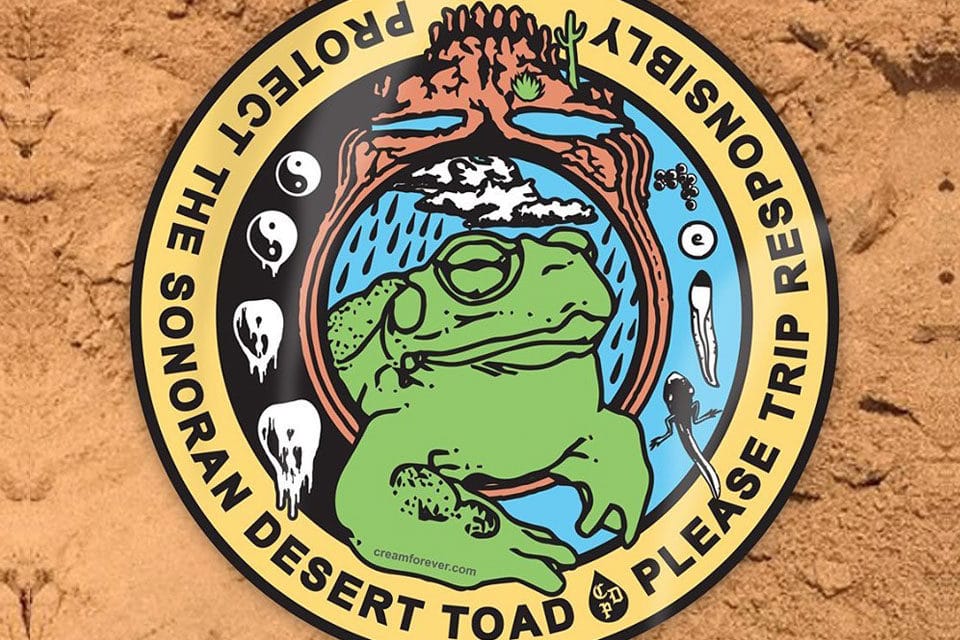 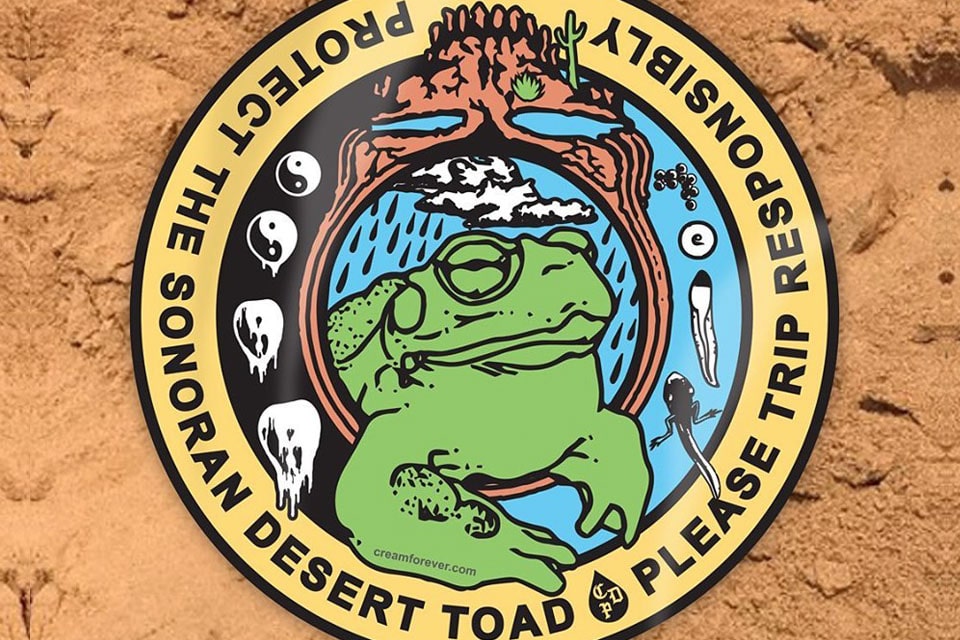 Life for amphibians in the desert has always been tough, even before the emergence of threats like habitat loss, pesticides, parasitic fungi and climate change. For the Sonoran Desert toad, also known as Bufo alvarius or the Colorado River toad, life is getting even tougher. This is due to the increasing market for the poison squeezed from its glands, which contain the powerful psychedelic 5-MeO-DMT. As the only known animal source of this psychedelic, they are proving to be increasingly inviting targets for poachers. However, a naturalist and artist have joined forces to raise awareness about the danger extraction poses to this long-lived amphibian, as well as to the people smoking its secretions.

Like the towering saguaro cacti, the Sonoran Desert toad’s natural range is centered around the desert for which the toad is named. The Redlist of Threatened Species, compiled by the International Union for Conservation of Nature, placed the toads in its lowest category of risk for extinction in 2004. However, it acknowledged that the toad was nearly extirpated (made locally extinct) in California. The Sonoran Desert region has since continued to experience rapid growth in population and human development, further diminishing and fragmenting the toad’s habitat. At the same time, the knowledge and popularity of the psychedelic compound extracted from the toad has grown.

Robert Villa, president of the Tucson Herpetological Society and a research associate at the University of Arizona’s Desert Laboratory on Tumamoc Hill, does not believe indigenous societies in the Southwest smoked the toad’s extract before its modern discovery. Instead, Villa believes the discovery and use of the psychedelic properties of the Sonoran Desert toad began much later, pointing to a 1967 paper published in Biochemical Pharmacology. This study might have stayed obscure were it not cited in a pamphlet published in 1983, which spread the knowledge of how to find, extract and consume the toad’s poison. Purportedly written by one Albert Most, it was initially distributed through photocopies shared between friends and fellow travelers. Now, it is readily available online. An author named Alfred Savinelli claimed to be Most in a 2017 episode of the docuseries Hamilton’s Pharmacopeia, in which Villa also appeared. Villa pointed to the pamphlet’s technical descriptions and use of academic citations as not being consistent with Savinelli’s account. “Hamilton had asked him if he was aware of any scientific literature beforehand, and he denied it,” said Villa. “I don’t know who wrote the pamphlet, but it just doesn’t line up with my interpretation.”

Whoever wrote it, the genie was out of the bottle. Savinelli or another person claiming to be Most founded The Church of the Toad of Light, which described itself as an “informal congregation of toad worshippers.” They even sold t-shirts featuring their moniker and a drawing of the Sonoran Desert toad. The use of the toad extract spread. Indigenous communities in Mexico began using it to help people quit using drugs such as meth and opiates, according to Villa. Self-identified shamans began selling or administering the extract for profit in Mexico and other countries. A black market for toad extract grew in the US, since 5-MeO-DMT is a Schedule I controlled substance. Some of these toad medicine practitioners, such as Octavio Rettig and Gerry Sandoval, have been accused in an open letter published online earlier this year of causing their patients harm or even death. However, amphibian allies wanted to do more than target bad actors in the toad extract industry: they also wanted to reach the growing legion of toad extract consumers and amateur toad hunters. 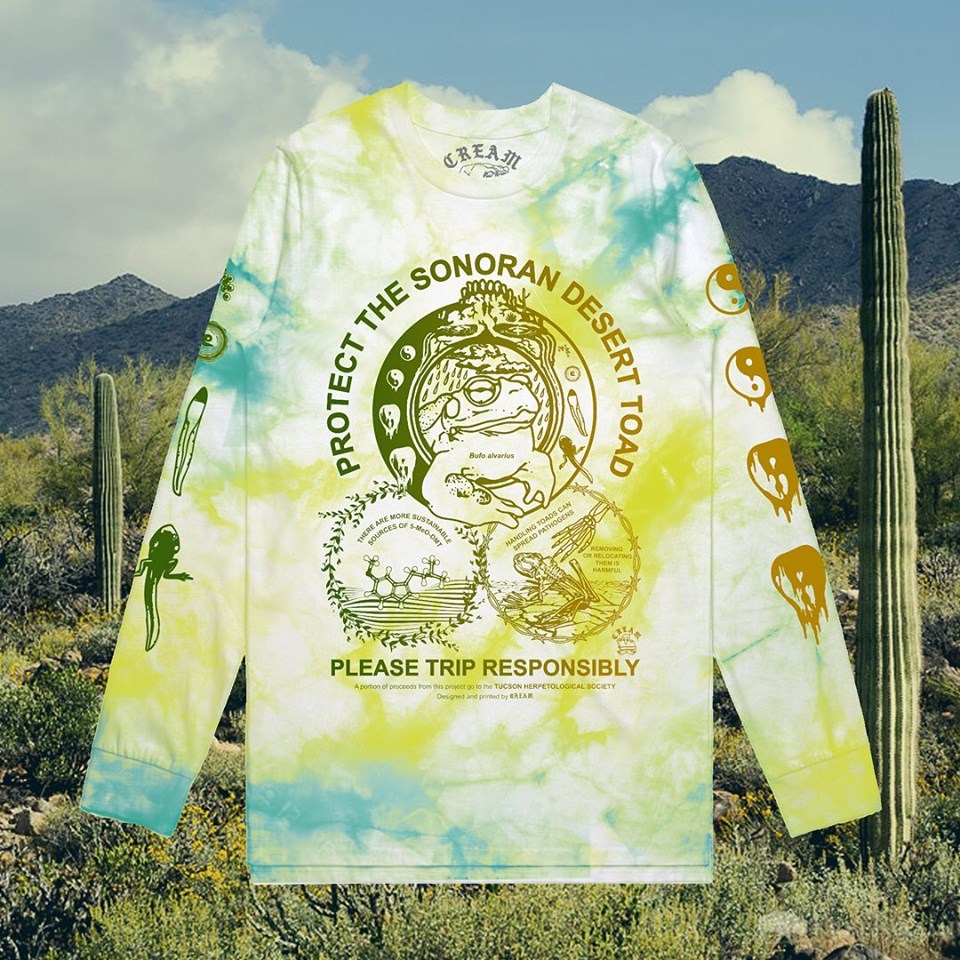 Villa turned to his friend Patrick Foley, the CEO and co-owner of Cream Design and Print, for help. Villa knew Foley had personally collected and smoked toad extract many years earlier. As the two friends discussed the issue over time, both of their perspectives evolved, eventually leading to the idea of partnering on an informational campaign to spread awareness of the harm being done to toads. Foley was partially motivated by his own memories of catching the toads and extracting their poison. “They do seem scared. You are pulling it out of its habitat during its mating cycle,” Foley explained. “It’s trying to get away, struggling, and you really have to hold and squeeze it. All in all, it seems like a pretty traumatic experience for the toad.”

By combining Foley’s interest in psychedelic art with Villa’s knowledge, they set about creating a design that would appeal to those who have consumed or are considering consuming toad extract. Foley drew inspiration from the 1983 pamphlet, and included other Easter eggs referencing psychedelic culture, such as an upside-down version of the iconic Grateful Dead skull. The design is centered around the image of a toad resembling the one used in the 1983 pamphlet. It also depicts the 5-MeO-DMT molecule and includes the message, “Please trip responsibly.” The poster lists some of the potential harm posed by removing toads from their environment and condemns the false narratives and cultural appropriation practiced by some toad extract providers. “You have the life cycle of the toad on the righthand side and the Yin Yangs melting on the left, representing not just a system out of balance, where one side of the Yin Yang is getting bigger than the other, but where the whole system is melting down,” Foley explained. “It’s a bigger structural problem than just one aspect of the system.”

Cream is selling t-shirts, bandannas, posters and other items featuring the design. A portion of proceeds are donated to the Tucson Herpetological Society. To date, $1,356 has been raised for the conservation group. Free posters have also been distributed and displayed throughout the Tucson area as part of the awareness campaign. Villa and Foley were both happy with the campaign’s progress, while being cognizant of the potential unintended consequences of their success. “Some people think just talking about it could have a negative consequence for the toad, almost how the DARE program maybe caused more kids to experiment with drugs because they had heard about them,” Foley said. “The way I think this campaign differs from that scenario is it’s not trying to scare people. It’s trying to provide more context and information. I think we are at a point of public knowledge about the toad that if this information isn’t pushed, the negatives of its use could be left behind. My hope is that by putting out this campaign now, this information will tie it together.” 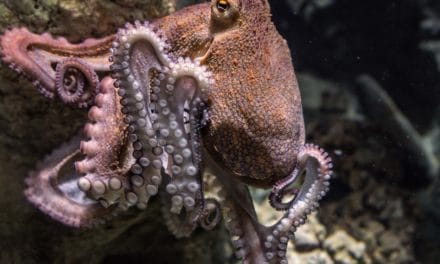