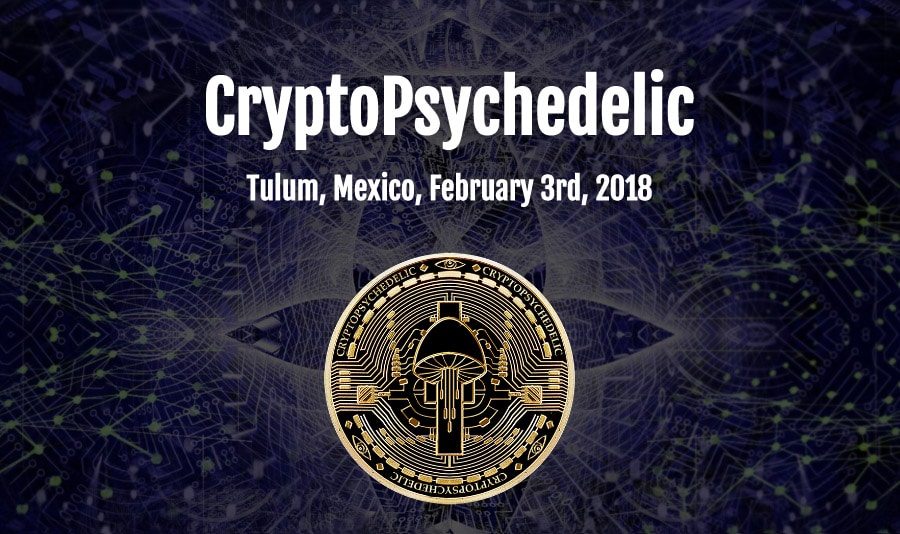 Last month, the worlds of cryptocurrency and psychedelics collided in a beautiful way when an anonymous Bitcoin multi-millionaire donated millions of dollars in Bitcoin to MAPS through the Pineapple Fund. This event was covered by major news outlets, and lead to other crypto-philanthropists stepping up to donate. Just a few weeks later, the Pineapple Fund went further by offering to match the next $4 million in contributions to MAPS to help complete funding for their upcoming Phase 3 clinical trial of MDMA for PTSD.

The emerging alliance between the worlds of cryptocurrency and psychedelics is exciting and ripe for continued exploration. Aside from philanthropy, how might blockchain technology help the causes of psychedelic research, drug policy reform, and fundraising? To explore this intersection, a groundbreaking event called CryptoPsychedelic will be held in Tulum, Mexico on February 3rd. Hosted by leading psychedelic advocacy group Psymposia and blockchain consulting firm Decentranet, this summit will bring together leaders and innovators from both of these worlds to ask forward-thinking questions while encouraging new connections and partnerships. We spoke with Psymposia co-founder Brian Normand about CryptoPsychedelic and the exciting possibilities that the event will explore.

Thanks so much for speaking with us, Brian. We have immense respect for Psymposia and it’s a pleasure to connect with you. How did the idea of CryptoPsychedelic come about, and what are you hoping to accomplish?

I started getting involved in blockchain technology over the summer. I had an interest in it back in 2012 right when Bitcoin started coming out. I was interested in it at the time because of the financial crash, but it never stuck. But for some reason, this summer I started really diving into it. I had heard of this thing called the Crypto Cruise in San Francisco, which was a small fundraiser for MAPS that sounded interesting. Nothing really came of that [for me] other than finding out some of the people who were organizing it, but it stayed on my radar.

Fast forward to December 2017: my partner Mike moved out to Oakland and the person he ended up rooming with was the guy who organized the Crypto Cruise. His name is Matt McKibbin and he founded a group called Decentranet that works in a variety of blockchain products, consulting, and related areas. We started talking immediately about hey, we’ve had this cruise, why not plan a more formal event? Then the Pineapple Fund came around and that got huge amounts of attention, showing that people in the crypto world have the ability to fund projects at this scale.

We’ve had a very short time to plan it; everything has come together really within the last few weeks. CryptoPsychedelic is not really a conference- it’s more of a summit where we want to ask questions about how each of these different fields can work with one another. Is there common ground here? Can crypto and blockchain be applied to psychedelic advocacy? Can it be applied to issues that we face with the war on drugs and prohibition? The idea of this event is to put people from these different communities in the same room and get them talking to one another. Our focus is on forming relationships and building a new community so that moving forward, we can get to know one another. That’s really what we want to do with this event.

I think there is some really compelling shared territory between these two worlds. With psychedelics you have the cognitive liberty movement, and with cryptocurrency it’s all about economic liberty. At the core, it’s about freedom, in a sense.

Yeah, I think you hit on it with freedom: the ability to make your own decisions. One of the things I want to touch on as a common ground in both of these fields is regulation. This is a core issue that both the crypto world and psychedelics face. That’s something that I would really like to explore- the parallels between both of these worlds, and the spectrum between government regulations and self-governance.

I think you’re going to see increasing regulation attempts in the U.S. in terms of ICOs and considering tokens securities. A lot of different things are going to start being talked about by regulators, but it’s not going to stop the momentum, just like prohibition is not going to stop drug use. I think that’s where these fields are sort of at right now. It’s interesting to me how they both have the potential to invert existing paradigms.

Yeah, absolutely. They seem to both be part of the new paradigm emerging within the old one, and so there’s friction there of course, but both seem inevitable. Psychedelics will completely revolutionize the field of mental health and have a ton of cascade effects, just like crypto is going to completely revolutionize economics and banking and have a ton of cascade effects as well.

I agree completely. Crypto was born out of the 2008 financial crisis- that was the birth of Bitcoin. In some ways, we can see the rise in psychedelic use as being a reaction to the Vietnam crisis and mainstream cultural narrative of finding meaning in organized religion, conformity, and patriotism. It fascinates me how psychedelics present an avenue for an authentic spiritual experience without the need for a middle man of a church, priest, or religion, and of course the blockchain accomplishes the same thing financially, allowing people to send and receive money without the need for a bank or government as a gatekeeper. In a way, psychedelics present an opportunity for decentralized gnosis and healing, just as blockchain gives us decentralized money and data exchange.

It’s really exciting. So for this event, can you describe the format?

There will be four conversation panels. One is going to focus on the science and research behind psychedelics. Another one is going to focus on drug reform advocacy, going beyond the research and using the science to inform different directions we’re heading. Then we’ll have a crypto panel and give an overview to the psychedelic people about what crypto is, where it is going, what the potential is… just an overview. Then we’re going to mix both of those groups into a crypto-psychedelic panel.

Not knowing what to expect is what’s making this so fun. We don’t have talks scheduled, and there are no presentations or speeches. It’s really going to be an organic thing that just goes in whatever direction it goes. We want to keep it like that.

Very cool- that’s quite different from the usual conference format. It seems really appropriate for studying this emerging relationship, giving a little structure but keeping the discussions open.

If this one goes well, I think we’ll be planning one for the fall. We don’t want this to be just a one-time thing; we want it to be an ongoing summit that brings these people together who want to make a difference in these fields. I think people who are involved in the advocacy side need to start looking at the next 5-10 years. Blockchain systems are going to become very real in this coming decade, so how is that going to look? How are we going to provide accessibility to people? How are we not going to make the same mistakes that we’ve seen, and is that even possible?

We are very grateful to Brian for speaking with us about this exciting event. To learn more or get involved, check out CryptoPsychedelic on the web, Twitter, Facebook, Slack, and Psymposia.