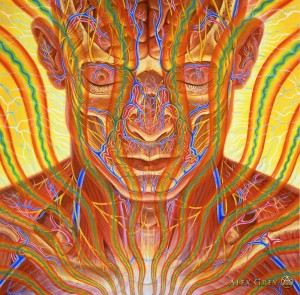 “Contemplation” by Alex Grey, one of the exhibiting artists at the MAPS fundraising event. | Image Source: AlexGrey.com

It’s not often that you get to help some incredible people purchase a kilogram of MDMA for a great cause, but that is exactly what’s happening April 17th at the Multidisciplinary Association for Psychedelic Studies (MAPS) fundraising dinner event in Oakland, California. Not only are they raising money for Phase 3 clinical trials of an MDMA PTSD study, but this year marks MAPS’ 30-year anniversary, and they are celebrating with some amazing guest speakers, artists, and musicians.

The lineup for MAPS’s 30th-anniversary event is enough to make any psychedelic advocate or visionary art fan drool. World renowned visionary art masters such as Alex and Allyson Grey, Martina Hoffman, Robert Venosa, and Android Jones will be displaying their artwork in a special gallery, while sonic landscapes are provided by Ken Jordan of The Crystal Method, DJ Spooky, and others. Speakers at the event include the executive director and founder of MAPS Rick Doblin, MDMA-study participants, other MAPS staff, and business leaders such as David Bronner of Dr. Bronner’s Magic Soaps. These contributors share a common belief that the work that MAPS is involved in with MDMA and other psychedelics is hugely important, and by lending their time, art, and energy to this fundraiser, it will make this event an evening to remember for everyone who attends. And if you can’t attend the event in person, you can listen to the free streaming of the entire event starting at 5 PM PST on April 17.

If you can’t make it to MAPS’ 30th-anniversary fundraising dinner on April 17, consider hosting a dinner of your own to fundraise for MDMA research.

MAPS is the leading psychedelic research and advocacy group in the world, and while they have helped support research on a wide variety of different psychedelic substances such as psilocybin, cannabis, LSD, ayahuasca and ibogaine, its genesis in the mid 1980s was catalyzed by an effort to keep MDMA (which has been historically legal and available for psychotherapy) from being classified as a schedule 1 substance. While that initial effort failed, it galvanized the organization to embrace the slow and steady process of showing the benefits of psychedelics to the world (and particularly to government organizations) through scientific research and clinical trials.

Thirty years later, the effect that MAPS has had is undeniable. They have raised over $20 million for psychedelic research and education and have helped to lay the groundwork for the present wave of marijuana legalization. Moreso, MAPS’ commitment to emphasizing the medical benefits and scientifically-provable safety and efficacy of psychedelics has played a huge role in bringing psychedelics back into mainstream awareness as powerful healing tools that can benefit all kinds of people, rather than being relegated only to countercultural or radical subcultures. By taking the long and challenging road of advocating for psychedelics within the system, they have expanded the science behind psychedelics and grown public support in deep and lasting ways.

MAPS’ fundraising dinner on April 17, 2016, will be held at the Scottish Rite Center in Oakland, California, and will celebrate three decades of advancements in psychedelic research and therapy. | Image Source: MAPS

The tangible fruit of MAPS’ 30 years of work is also showing more and more every day, and their current work with MDMA is a perfect example. Through the help of individual donors and fundraising events like the upcoming dinner in Oakland, MAPS hopes to purchase $400,000 of medical grade MDMA for Phase 3 clinical trials that would pave the way for MDMA-assisted PTSD treatment. If successful, US combat veterans and others who suffer from post-traumatic stress disorder could seek out legal MDMA-assisted psychotherapy to alleviate their condition. MDMA has been proven by MAPS-sponsored and other research to be hugely effective at helping PTSD sufferers process intensely painful experiences and see them in a new light, and the time has surely come for this treatment to be made available to the people who need it most.

If you would like to join in on the festivities and help a noble cause, you can purchase tickets to the fundraising event here. For those who would like to support MAPS but are unable to attend the dinner in person, tax-deductible donations can be made here.