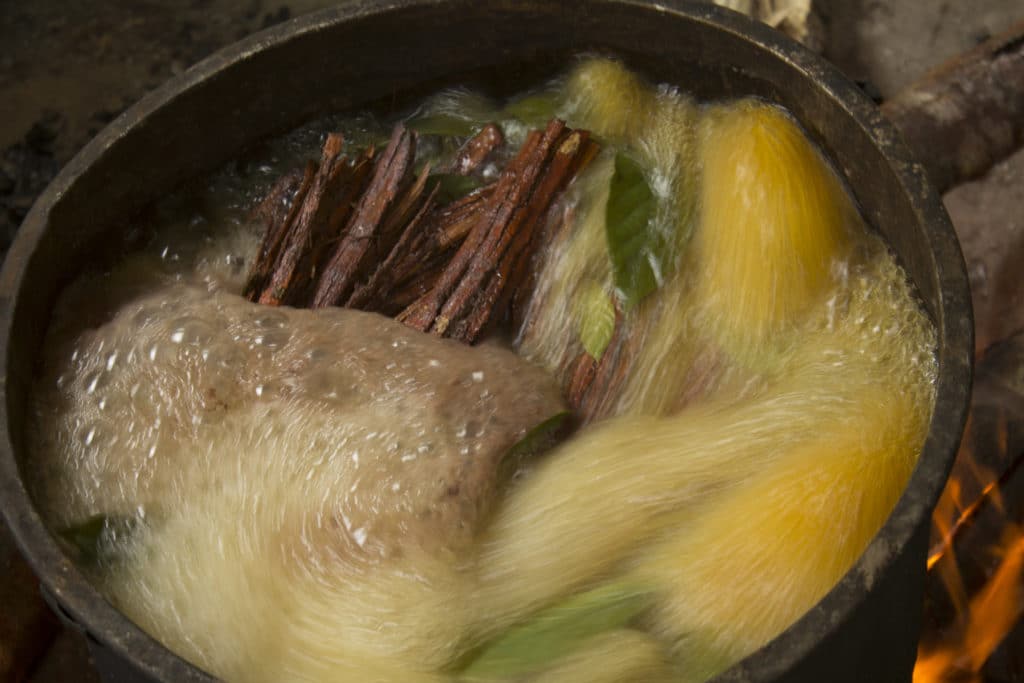 At the center of the new psychedelic renaissance is an Amazonian tea called ayahuasca, which contains dimethyltryptamine or DMT, one of the most powerful hallucinogens known to science. Traditionally brewed by indigenous shamans in places like Peru and Brazil, ayahuasca is gaining more mainstream appeal for its purported use in treating addiction, treatment-resistant depression and PTSD.

How does ayahuasca help? Recent research in the International Journal of Neuropsychopharmacology suggests it partially has to do with the “afterglow effect,” a period of positive mental and physical effects that last long after a certain drug has metabolized in your body.

Think of an afterglow as the opposite of a hangover—instead of feeling sick and on the verge of death, those who report afterglow experiences describe it as akin to “inner peace” or being “cleansed.” Psychiatrist Walter Pahnke described afterglow as an “elevated and energetic mood with a relative freedom from concerns of the past and from guilt and anxiety.”

To see how afterglow plays a part in the benefits of ayahuasca, researchers funded by the Beckley Foundation twice assessed participants in an MRI scanner, before and after administering the brew. They also had their subjects fill out a Hallucinogen Rating Scale and a mindfulness questionnaire, with a follow-up two months later.

The study has some weaknesses—only 16 participants were involved, all of whom had prior experience with ayahuasca while no control for time or placebo was used. As the authors put it, “Given the exploratory nature of this analysis, we did not implement corrections for multiple comparisons, and results should be interpreted with caution.”

Additionally, the subjects already had high mindfulness scores—perhaps due to previous encounters with ayahuasca, or to psychological profiles that drew them to ayahuasca in the first place—but they did score even higher after these sessions, which is significant.

Regardless, this research is still valuable, as it’s the first to show that psychedelics can change “neurometabolic, functional, and psychological balance beyond the acute stage,” i.e. the hallucinating portion of a “trip.” In other words, it might reveal the “key” that makes psychedelic medicine so therapeutic.

Or, as the authors put it, “our results provide another interesting link between psychedelic-induced neural modifications and the therapeutic potential of ayahuasca.” 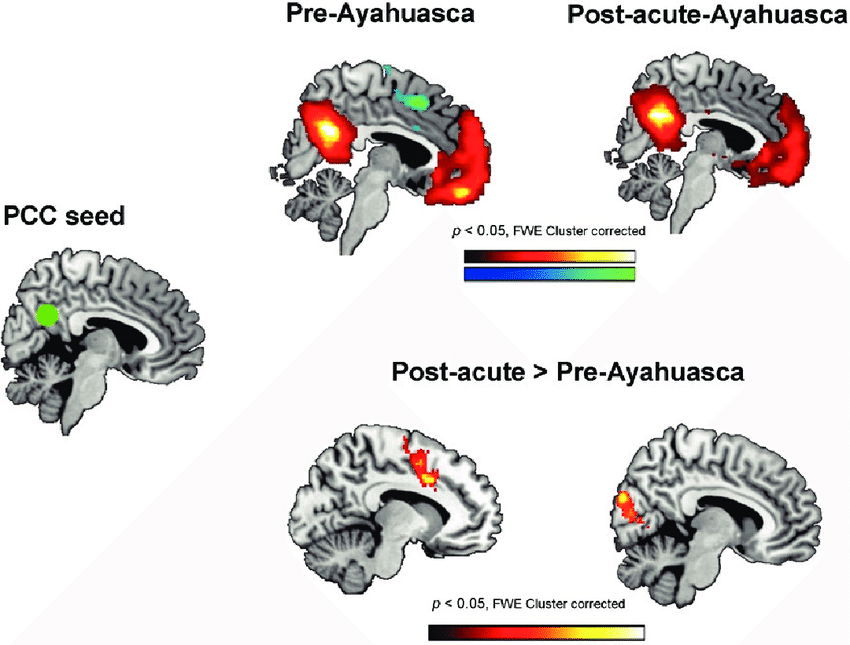 Seed-to-voxel connectivity maps between the posterior cingulate cortex (PCC) seed (green circle) at MNI coordinates x = 0, y =-56, z = 28, and the rest of the brain. The top panels show statistically significant positive (hot colors) and negative (cold colors) correlations in the pre-ayahuasca and post-acute assessments. The bottom panels show the results of the second-level random effects analysis (post-acute vs. pre-intake). Only significant increases in connectivity were found, located in 2 main clusters: the anterior cingulate cortex (ACC) (left brain map) and the visual cortex (right brain map). In all statistical maps results are shown corrected for. (via)

Specifically, magnetic resonance spectroscopy was able to show these neurometabolic changes before and after ayahuasca in the posterior cingulate cortex, a region of the brain that is linked with emotion, memory function and self-related thinking. The jury is still out on the conclusive cognitive role of the PCC, but it has been shown to “deactivate” during meditation. But perhaps most telling, the region is also packed with 5-HT2A receptors, the serotonin receptors that are targeted by most psychedelic drugs.

These results suggest that lingering “cross-talk” in the brain (between the default mode network and the task-positive network, two anti-correlated networks in the brain that don’t normally connect) could be responsible for the feelings of increased mindfulness and self-kindness after a psychedelic experience.

These changes are believed to happen via a glutamatergic mechanism. Glutamate is the most common neurotransmitter in vertebrates, such as yourself, and plays an important role in synaptic plasticity, learning and memory. Some research, including ketamine as a potential treatment for depression, points to glutamate as a target for treating mood disorders.

The data in “Assessing the Psychedelic ‘After-Glow’ in Ayahuasca Users” adds to a report last year in the open access scientific PeerJ that found a link between harmine (one of the main active ingredients in ayahuasca) and neurogenesis, or the creation of new neurons in the brain.

Preliminary research on this topic is exciting, not only because it’s so promising, but also because ayahuasca is relatively safe. According to a 2007 report in Addiction, it has a “safety margin comparable to codeine, mescaline or methadone. The dependence potential of oral DMT and the risk of sustained psychological disturbance are minimal.”

In the future, studies with larger samples, not to mention double-blind, placebo-controlled designs—perhaps even recruiting subjects with no prior experience with ayahuasca—will help us further understand how this jungle vine can heal the psyche.