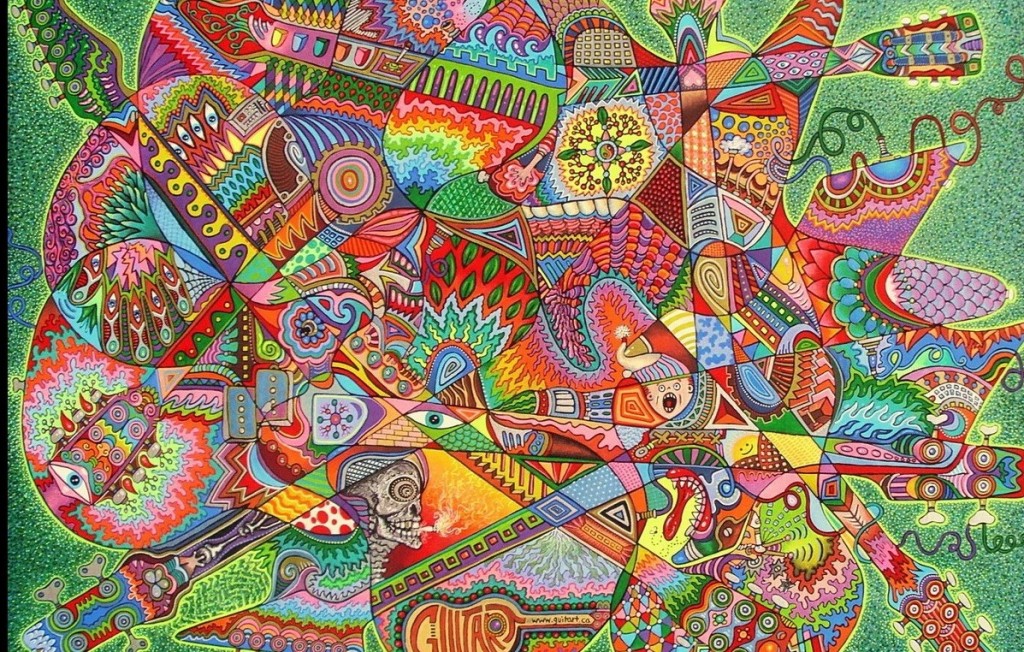 Last week, Imperial College London released a landmark study that shows a possible neurological connection between listening to music and the visions associated with an LSD experience. The study, published in concert with the Beckley Foundation, might help explain scientifically what many people have experienced subjectively on an LSD trip — epic visualization, a sense of oneness with the universe, feelings of childlike wonder, and lasting positive changes in life outlook. A small but fascinating part of the study gave insight into how music affects the brain during an LSD experience, and the findings are a tantalizing clue into the important role music can play during psychedelic journeys, whether they be psychospiritual explorations or part of psychedelic-assisted psychotherapy. 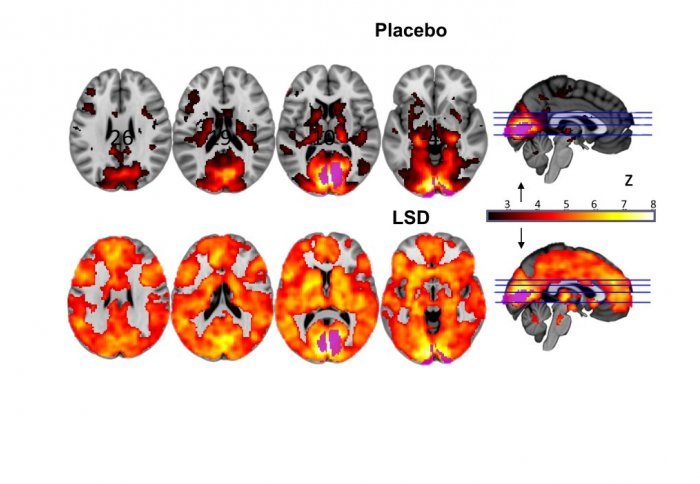 In subject who took LSD, brain activity was heightened in regions associated with vision and memory, compared to subjects who took a placebo. | Image Source: Imperial College London

Music and Visions Mapped in the Brain

The key findings on how music can enhance an LSD experience revolve around a part of the brain called the parahippocampus. This brain region is involved in memory and mental imagery. When under the effects of LSD, the parahippocampus shows signs of heightened interaction with the visual centers of the brain located in the visual cortex. In the study, the more that these two brain regions communicated with each other, the more richly detailed visions that the subjects reported having, giving us scientific evidence that music does indeed enhance the visionary aspects of an LSD trip.

The lead author of the study that delved into these musical connections, Mendel Kaelen, put it succinctly: “This is the first time we have witnessed the interaction of a psychedelic compound and music with the brain’s biology.” It’s also highly likely — though not proven —  that this type of connection is enhanced not just on LSD but on other psychedelics as well.

The implications of these findings are exciting for many reasons. Primarily, it reinforces what many psychedelic users have already known through personal experimentation — that music can play a huge role in the direction that a psychedelic journey takes. Bolstered by this new scientific understanding of how this process works, we can begin to better understand exactly how psychedelics and music interact with each other, and use that information to enhance psychedelic therapy. As Kaelen describes: “A major focus for future research is how we can use the knowledge gained from our current research to develop more effective therapeutic approaches for treatments such as depression; for example, music-listening and LSD may be a powerful therapeutic combination if provided in the right way.”

The new research from Imperial College can also be applied to better understand the traditional role that music plays in indigenous and contemporary psychedelic ritual. Nearly all cultures that practice psychedelic rituals are known to incorporate music in some central way into their ceremonies, from peyote songs to ayahuasca icaros to lively iboga initiations. The shamans at the heart of these rituals understand from decades or sometimes centuries of tradition that the songs in these ceremonies play a vital role in energetically grounding participants and guiding them into positive and transformative mental spaces where they can feel supported in their at-times overwhelming and often uncomfortable self-work. We may find in future studies that not only does music enhance the intensity of a psychedelic journey, it also has the power to relieve the considerable stress that psychedelics can put people under, giving those who are involved in ritual or undergoing psychedelic-assisted psychotherapy a higher chance of success of making lasting positive breakthroughs.

It’s also fascinating to look back at our recent psychedelic history in the West, from the 60s to the rave scene to modern festivals, and investigate with new eyes how and why music is at the epicenter of these social movements. We may begin to see that while the musical styles differ across these movements, they share a profound similarity in function not only with each other, but with traditional ceremonial music as well. It’s exciting to see science begin to catch up to generations of shared subjective experiences that span both time and culture — it’s all the more poignant when these revelations about the intersection of music and the psychedelic experience can be used to enhance the healing potential of psychedelic therapy.

Three Reasons Advocates Should Understand the Limitations of Psychedelic Therapy