As clinical trials for MDMA move forward in the hopes of making it an FDA-approved medication for post-traumatic stress disorder (PTSD) by 2021, some veterans are taking off to the Amazon to treat their condition with the jungle brew ayahuasca. While the empathogenic MDMA is better known, more common, and less intimidating of an experience than a full-on ayahuasca ceremony, for those who feel ready for it, the Amazonian concoction has the potential to dive much deeper, healing not just combat trauma but also the underlying childhood and ancestral traumas lurking beneath it. Such a profound journey of self healing can be quite daunting, but with the bonds of brotherhood and mutual support before, during, and after the ceremony, these veterans are making leaps and bounds in attitude, physical and mental health, and general outlook on life.

Exploring this growing connection between veterans and ayahuasca is a new feature-length documentary called Soldiers of the Vine, an independent film that follows a small group of ex-soldiers on a journey of healing to Peru. Organizing the trip is Ian Benouis, a veteran and plant medicine activist who brings the group to a retreat center in the Amazon for a full 10-day dieta with 3 ayahuasca ceremonies guided by Shipibo shamans. As someone who has himself received immense healing from ayahuasca, Ian hopes to encourage his fellow veterans to experience how ayahuasca can help break the cycles of depression, prescription antidepressants, suicidal thoughts, and the burden of chronic PTSD. After attending a Soldiers of the Vine screening in Austin, Texas, we sat down with Ian to discuss his story.

Thanks so much for speaking with us, Ian. Can you describe your first ayahuasca experience?

My first encounter with ayahuasca was 20 years ago on the San Juan islands outside of Washington. My friend had gotten the brew from Terence McKenna, who was growing the constituent plants out on the big island of Hawaii. We had no idea what we were doing. His wife and my wife were there, but it was just my friend and I doing it. My buddy thought you had to purge for the medicine to work and be activated, so after I took a cup of it and nothing really happened, he suggested I drink more. So I think within an hour I drank 3 cups of that stuff, and ended up making myself purge, but I had the most amazing time. The medicine worked great, and instead of getting my butt kicked, she was very gentle. I remember being able to take these Jedi holocrons of people that were important in my life and just inspect them for hours. I was so happy later to realize that after 3 cups, I didn’t get my butt kicked from here to the other side of the universe. No facilitator either, just some psychonauts doing it DIY.

Now take us from that initial experience to where you are now, using ayahuasca as a healing tool for fellow veterans with PTSD.

Well, I did my military service and got out. I was a Blackhawk helicopter pilot during Operation Just Cause in Panama right before Iraq and Afghanistan, and drank ayahuasca three more times without really knowing I was healing myself. It wasn’t until a couple of years ago when I reconnected with veterans at a conference on veterans and cannabis, and they started telling their stories [that I realized I had been undergoing a healing process via psychedelics.] I already knew there were issues with PTSD, cocktails of pharmaceuticals that didn’t work for lots of people, and of course the suicides, but when they started telling their stories it was like a psychedelic to me, a medicine, and I started crying. I was purging up all this stuff, and was like “Why is this happening to me? I don’t have war traumas.” That started round 2.0 of my healing. I realized what psychedelics had done for me, and how that healing had gotten me to where I could raise a family and be a good husband and father. And now to complete my healing, I could return to the medicine and share it with others.

I’ve been sharing it ever since. I started drinking again about 2 years ago, and since then have been taking fellow veterans and non-veterans to ceremonies to do the work. 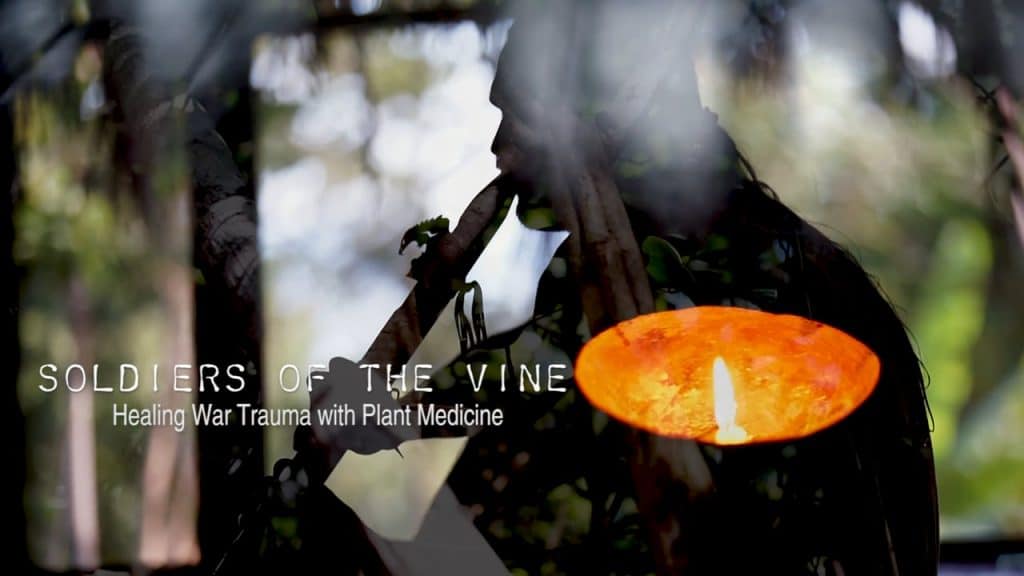 The biggest thing on the map now for helping veterans treat PTSD is MDMA, which is entering phase 3 clinical trials. In your eyes, what are the differences between ayahuasca and MDMA when it comes to healing PTSD? What do they each have to offer?

That’s a great question. MDMA was really the medicine that opened the door to everything else for me when I got out of the Army in 1990. I’ll start by saying that because of prohibition, we’re all figuring this out together at the same time, and that’s one of the real challenges here. So first off, MDMA for people that are more medicine-naive is a really great entryway into the healing path. Stepping into a 3-day ayahuasca weekend is a lot more daunting than one deep MDMA session. You get so much fear reduction with MDMA, whereas the ayahuasca can definitely show you really deep dark stuff that’s very powerful. The MDMA is just going to allow you to experience those things without the fear component, with the fear being totally turned off.

The answer honestly is more about what’s the particular triage for the individual, and that’s what we’re figuring out. What are the protocols, and the pathways for people? For a lot of veterans that I’m working with, the default is they come back from war, they’re on all these meds, 20-30 meds a day, they’re hitting alcohol, and they try to kill themselves because the side effects are suicidal thoughts. Then they find cannabis, start getting off all the medications, and so usually it’s cannabis that saves their lives, and that’s the first step to deeper healing. That next step might be MDMA, might be LSD, might be psilocybin, and it might be ayahuasca, but there’s sort of a gradient. I would put MDMA on the pathway to ayahuasca or other medicines, and put ayahuasca further down the line to do the deeper work. But that being said, there’s no reason MDMA can’t accomplish the exact same things from a trauma perspective. So then it becomes much more about the access to the medicine and facilitators, the person’s particular issues, etc.

What have you learned in your time working with ayahuasca, both for yourself and for other veterans who approach it for healing their PTSD?

One of the most important things is that the money is in the integration. In other words, whatever you can do during the medicine work, it’s only as good as what you’re able to integrate, and that’s the real challenge of this. The harder part was not going to Peru and doing the work together- it was when we came back, trying to support each other in the integration work, because you’re ripped open emotionally, physiologically readjusted, and trying to put yourself back together. That’s been the challenge: trying to support each other with everyone at different points of their lives and on different steps of their healing path. You need to have a support system to be successful. You need to have a sponsor, at least one “battle buddy”, a person to count on to have the best chances of success. And you need access to other technologies to support it: yoga, acupuncture, flotation tanks, whatever works for you.

What I can say is this stuff works, and it can work on the hardest cases. Beyond treating PTSD from combat, these medicines can ultimately work on the childhood trauma which is the underlying source of most war trauma. The highest correlating factor to getting PTSD in war is childhood trauma. People can have a lot of other challenges in there too that can make it more problematic and difficult, and make it take longer to be successful- addictions, other medications, and life circumstances can be a bar to true healing. Ayahuasca is not a silver bullet, and it’s not going to sort out all your problems. The other aspects of your life have to also be in alignment and be supportive to make it all work. It’s a complete healing modality.

The focus on the importance of integration seems to be a relatively recent understanding. People in the psychedelic community are well aware of it, but for people who are just getting acquainted with these medicines, it’s still news to them.

I had a super long conversation about that yesterday. It’s so important to ask “What are the reintegration resources for these people doing these particular medicines?” If you can’t answer that question, then you sort of have a problem. That’s like saying, I’m going to take all these people, give these great life sermons, but have no plans or way to inculcate them into their life. So, what’s the point? It’s like seeing a cool movie- it feels good and it’s entertaining, but yeah your psychedelic experience is only as good as your amount to integrate. To me, it’s the metaphor of the tree and the fruit: nobody cares how many ayahuasca ceremonies the tree has been to, or what its spiritual practice is, you just care about the fruit. Does the fruit taste sweet?

I love these metaphors, and through my healing work I now understand the power of parables. Because on these medicines that’s what you get: those are the gifts, especially on ayahuasca. It’s a picture, a song, some kind of symbol, or an abstract concept that has meaning to you that you can take back because it’s a concept. You can’t necessarily take back the 15-minute action sequence, that’s kinda hard.

Right, totally. It’s the workings of the neuroplasticity enhancement, neurogenesis, and lateral thinking that seem to really last. They sort of encapsulate larger understandings in a simple way, like “visionary chunking”.

Where can people watch Soldiers of the Vine?

The film is online, free, and available to watch now.

We are very grateful to Ian for bringing transformative healing tools to veterans in need. In addition to Soldiers of the Vine, Ian is also involved in another upcoming documentary project called From Shock to Awe, which you can support here. 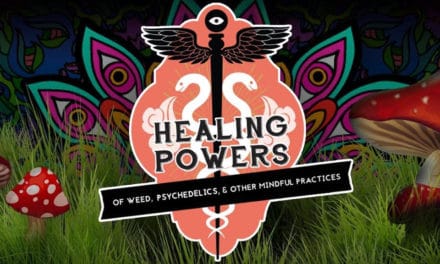 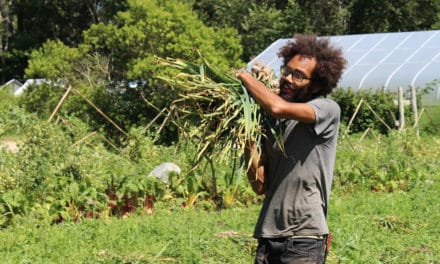